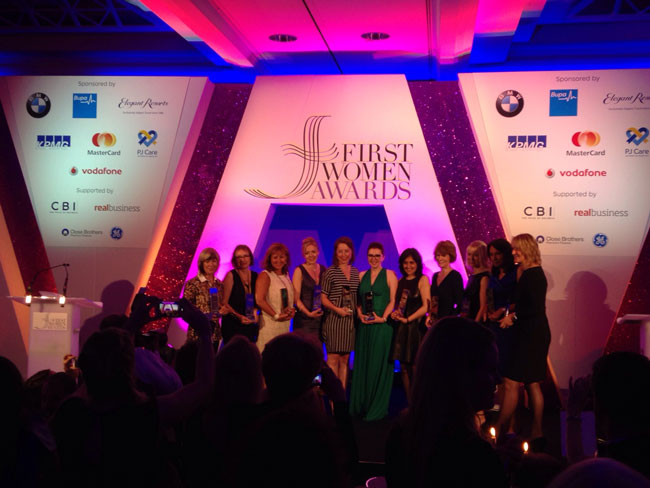 Claire Guest, co-founder and CEO of Medical Detection Dogs, has won the national First Women award for Science and Technology.

The First Women Awards were founded by the CBI to recognise the successes of high-achieving women in a range of fields from engineers to entrepreneurs. In the exclusive setting of the Lancaster London hotel, Canadian comedian Katherine Ryan, a regular panellist on BBC comedies Have I Got News for You and Mock The Week, presented the awards to the winning women.

In a category with nominees from a diverse range of scientific backgrounds including the molecular mechanisms of dementia and post-trauma recovery research, Claire Guest was declared the winner. She impressed the judges with her record of overcoming significant personal challenges to establish canine olfactory detection of disease as a credible new technology.

Claire Guest commented: “To be nominated alongside women with such impressive records in the world of science and technology to me is a testament to the extraordinary potential of the work being carried out at the charity I am lucky enough to run.

“I am in the unique and enviable position of working with a technology that has a fluffy coat and a waggy tail!

“But the fact that dogs are our best friends is not a reason to dismiss them as the highly developed bio-sensors they are. Men have created machines capable of analysing odours in the past couple of decades. The dog’s nose has been in development for 800 thousand years and unsurprisingly is still leagues ahead of any invention existing today.

“Dogs can detect parts per trillion. That is the equivalent of one spoonful of sugar in two Olympic sized swimming pools. It is not hard to believe that they can detect the odour of human disease.

“I am very grateful for this award. To me, it further establishes the credibility of the charity, which is important as we receive no government funding and rely entirely on public donations to fund our research. The faster we can prove scientifically and robustly that our technology works, the sooner we can turn our potentially life-saving research into reality.”

Medical Detection Dogs trains dogs to use their remarkable noses to detect cancer in urine or breath samples. In training trials they have been shown to achieve a reliability of 93 per cent, much higher than many existing tests used by the NHS.

The charity’s second arm provides life-saving support to individuals with long-term serious conditions such as brittle type one diabetes, by training dogs to be alert to assist them. The dogs alert their diabetic partners to dangerous falls in their sugar levels and prompt them to take their medication before they suffer a hypoglycaemic attack.

The charity is running two clinical trials with the NHS into the early detection of cancer. One is in partnership with the NHS Milton Keynes University Hospital into prostate, kidney and bladder cancer using urine samples and another into breast cancer using breath samples.

Medical Detection Dogs also recently announced that has received a Bill and Melinda Gates Foundation grant, along with its collaborators Durham University, The London School of Hygiene & Tropical Medicine and The Medical Research Council Unit The Gambia, to investigate the possibility of dogs helping to detect malaria in communities struggling to eradicate the disease.