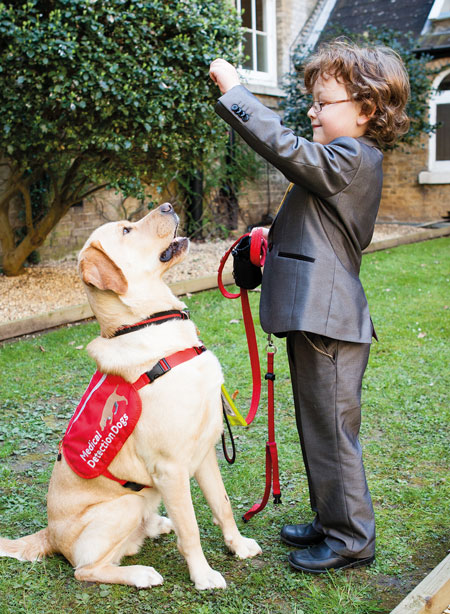 You’d be forgiven for thinking that this was just another happy, healthy child with his four-legged companion. But you’d be wrong because the little boy has diabetes and the dog is his life-saver.

A long-awaited only child, Archie started drinking enormous quantities of milk and water at 11 months; two months later he was diagnosed with diabetes. It was a devastating shock for his parents, Jayne and Bill Dawson, and in that instant, their lives changed for ever. Jayne gave up her job as a finance consultant, re-training as a yoga teacher, while Bill decided to be a full-time father. Their lives revolved round their sick child and as the years passed, they struggled on feeling very alone and scared. Archie would hypo every night which meant little sleep and a lot of worry for his parents.

One day Bill’s mother read about Medical Detection Dogs and from that day, all their lives changed for the better. They were warned that it would be a long, slow process because Archie was so young, but that eventually he would receive a dog. In February 2015 Archie was matched with Domino, a two-year-old Labrador, and after a 10-day home visit, he became a permanent member of the Dawson family. Bill had grown up with dogs but Jayne had not and was in fact quite nervous of them after a bad experience when she was young. She says, “Not knowing about dogs was a bit scary and I never realised how much hard work is involved – in trusting a dog. But Domino was just wonderful. He’s not a dog, he’s a little person, like another child, like he’s always been there. He is so much a part of the family unit now.”

Domino has transformed the lives of Bill and Jayne and, most importantly, Archie. “Because Archie was diagnosed so young, we don’t know life without diabetes,” explains Jayne. “Before Domino we were in a void, we never knew where to turn, we were unsettled. He has brought sunshine into our lives – he is the last piece of the jigsaw. Now we are sleeping more, relaxing and feeling like a whole family. Before, we never liked to plan or think ahead but now we can see a beautiful future.”

Archie tells his Mum that she cannot understand what it is like to be him – but Domino does. This young dog has given him confidence and independence and everyone has noticed the difference, even in just a few months. At one time he didn’t want to go to sleep for fear of not waking up, but now he sleeps like any other seven-year-old, albeit with a dog beside his head! He is happy now to eat different foods and make new friends. Every morning, Archie bikes to school with Jayne and Domino running to keep up. At the moment Domino does not stay in school as Archie has a full-time carer to check his bloods every hour. Also, it is felt that Domino’s most important work is at night and as he is still in training, working a 24-hour-day might be too much for him. After school, Domino sits on the touchline while Archie plays rugby or tennis; the latter is agony for him as he adores tennis balls but manages to show great self control in leaving them alone! “We call them the Dynamic Duo,” laughs Jayne.

Before Domino, Archie would not leave the room without one or both of his parents. Now he plays happily in his bedroom and Jayne and Bill can hear him chattering away to Domino or even reading to him. Although he is so young, Archie understands fully that Domino is there to save his life and he has proved his worth with 1,300 alerts since his arrival in July 2015. When Archie is really low, Domino will jump up and down and if he thinks the message is not getting through he either barks or stands and stares intently. “He is priceless,” says Jayne, “ and the physical and emotional effect he has had on Archie is better than any medicine. Thanks to Domino, Archie has a better quality of life than we ever imagined. ” Domino does his job wherever they go – even settling down to watch the film at the cinema. “Everybody adores him,” says Jayne. “He knows he’s handsome – he’s a right little diva!”

But the last words must go to a brave little boy: “Domino is lovely, he’s cute and fluffy. He is my best buddy and he helps me feel safe. If I’m not well he’ll tell Mummy and Daddy and I won’t have to go to hospital. I can eat, go to bed and feel safe and happy.” Just like any other seven-year-old who runs and plays and giggles on the beach with his very best friend…