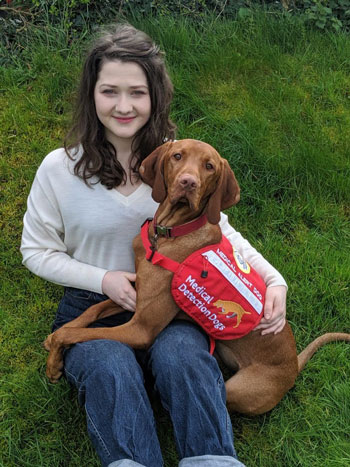 Up until the age of 20 Connie was having a normal young person’s life, but in her final year at University she slowly began to feel very unwell. After a minor surgical procedure, things dramatically changed for the worst and her life was turned completely upside down. Instead of coming out of hospital on the same day, she was admitted to intensive care and spent two weeks in the Acute Care ward with a mystery condition. If it hadn’t been for an amazing junior doctor she would not be here today. Connie had an adrenal crisis and was diagnosed as having Adrenal Insufficiency.

She now believes it was triggered by Lyme Disease which she contracted whilst doing her University Biology fieldwork. This meant her Pituitary gland wasn’t functioning as it should, and overnight she became dependent on medication to replace her cortisol. This kept her alive, but as Pituitary glands are important for controlling and balancing many vital hormones, Connie developed other serious problems. In addition to the lack of cortisol she was diagnosed with other rare conditions such as Cranial Diabetes Insipidus (Imbalance of fluid in the body) and PoTs (Postural Tachycardia). Life became incredibly challenging. Just cleaning her teeth became a huge effort. She was no longer well enough to continue at university, became housebound, needing a wheelchair to get around, and reliant on her family for every bit of her care.

Unlike diabetes where blood sugar levels can be instantly monitored, currently there is no instant way to test your blood levels of cortisol. Connie very quickly discovered that the replacement pills kept her alive but could not be fine-tuned, and there is no way of telling if she had too much or too little cortisol. Having too much cortisol causes health issues such as immune system suppression, weight gain and osteoporosis, and too little meant she was at risk of having another crisis and needing emergency hospital treatment. Even doing relatively normal things like walking, talking or taking a shower, would often need more cortisol. The difficulty in controlling cortisol levels meant she was constantly living on a knife edge and was too ill to venture far from home.

Determined to find a positive way through Connie researched and discovered Medical Detection Dogs. From the start they were so supportive and wonderful, instantly giving Connie the hope she needed. Dogs could apparently detect minute changes in cortisol and could be trained to alert her if her levels got too low. Connie wanted to have the focus away from her problems, so she decided to try and train a puppy herself rather than be given a fully trained dog. She knew this would be a challenge, and a risk as there was no guarantee the puppy would be good at the job, and well behaved enough to pass the strict accreditation criteria. To make things harder for herself she chose a Hungarian Vizsla, a breed that can be highly strung and nervous. The huge advantage of this breed however is they have amazing noses, and more crucially have a reputation for loving snuggles! MDD helped her choose a breeder who was experienced in selecting puppies with the right temperament, and a few months later an 8-week-old puppy called Roo came into her life.

From day one they became inseparable and Roo lived up to his reputation as being the master of cuddles! Even more importantly, with weekly training from MDD he quickly understood what his job was and became a cortisol expert, taking responsibility, constantly checking, never taking a day or even hour off. By 12 months old he had passed the Kennel Club Gold award for good dog citizenship and was alerting up to 6 times daily. He would go everywhere with Connie and was spot on, alerting at exactly the right level every time. He has surpassed all expectations and since Connie has had Roo she hasn’t had one crisis where she has needed emergency hospital treatment.

Sadly, disaster struck when Roo was just a year old and he was rushed to veterinary hospital with meningitis. It was a terrifying time for Connie but amazingly Roo showed, yet again, what an amazing dog he was and against all odds he pulled through. Incredibly, as treatment, he was put on a year’s course of the same cortisol pills and painkillers as Connie, and even though it wasn’t needed, mutual sympathy meant their bond became even stronger! Proof dogs are like their owners!

Since his recovery both Connie and Roo have continued to improve, and Roo became a fully accredited Medical Detection Dog in February 2020. He also became a pin up boy on an academic poster/paper, written by Connie’s endocrinologist, which won an award.

Recently Connie was lucky enough to try a new way of delivering her cortisol via a pump rather than pill. This meant cortisol is given continuously into the body (similar to insulin pump) which more accurately mimics the body’s natural rhythms. Roo had no problem adjusting to this new delivery system and now Roo and pump are the dream team! Together they have managed to halt the decline of her health, stabilize Connie’s condition, and fine tune the amount of cortisol she actually needs downward. Without Roo this would have been impossible as it would have been too scary to reduce medication. Confident Roo will alert her if her cortisol gets too low, she can hopefully avoid serious side effects of having too much medication in the future. With his support and aid, Connie now feels secure enough to go outside and do things she couldn’t before.

Connie’s life has changed dramatically thanks to Roo and Medical Detection Dogs. Without them her health was spiralling downward, they have caught her and are now helping her feel positive about the future. With Roo by her side, living an independent life will hopefully, one day be a possibility again. Thank you Medical Detection Dogs for saving her.