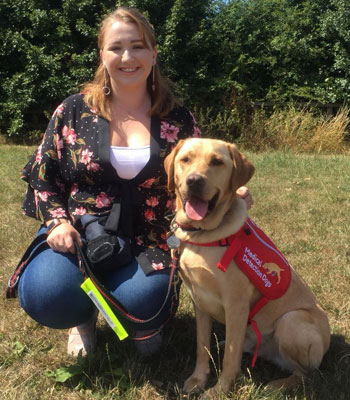 Elizabeth’s journey with PoTS has been a rocky one to say the least. She didn’t have a proper diagnosis for years, but things started off somewhat manageable.

She only appeared to have black out episodes whilst doing judo and used to get some kind of warning beforehand. As time passed she began to feel more unwell in day to day life; was always extremely tired and dizzy, ached constantly, and had frequent heart palpitations and chest pain. Her black outs also started happening more and more frequently without warning, and whilst doing daily activities, such as school, shopping or watching TV. Elizabeth also had a fair few bad injures and concussions from dropping suddenly. It really began to interfere and negatively impact her life, it stopped her doing anything independently and cut short any ambitions Elizabeth had for a judo career. It not only put stress and worry on Elizabeth but also on her family. It especially impacted her education, as she was in sixth form at the time when things got really bad, so she had to take an extra year in order to catch up and achieve the grades she needed for university. Elizabeth had to take a year off whilst at university due to blackouts getting so bad and interfering with her studies.

One of the main frustrations of living with the condition was not being able to label what was going on. Elizabeth had seen a lot of medical professionals and some even subtly suggested it could’ve been all in her head. She had numerous tests done at hospitals, which all seemed to come up with nothing useful, until she finally got seen by a cardiologist who diagnosed her with PoTS. She was put on medication which seemed to help stop the black outs for a while, until things got worse again. The dosage of the medication would go up, she’d get better, then worse again and so on. Elizabeth felt she was doomed and that there was nothing that could help her. Elizabeth felt like there was no hope in managing her condition and she was sentenced to being babysat for the rest of her life. However, whilst in her first year of university, she saw an episode of Super Vet where an epileptic alert dog was being treated, and with some research online she found Medical Detection Dogs. Elizabeth was ecstatic seeing all the amazing work they do to help people similar to her and couldn’t wait to begin the application process! When Elizabeth received the call telling her they had her first dog match she was absolutely buzzing. This was when she first met Henry, a stunningly handsome golden lab looking at her with big bright brown eyes- it was love at first sight! Henry had such a bubbly, loving and gentle personality, Elizabeth just knew that he was going to be the dog for her.

Elizabeth was anxious and worried that the scent training wasn’t going to work, that Henry wasn’t going to pick up anything and she was going to be back at square one again. But Henry absolutely excelled in scent training! Before long Henry and Elizabeth were partnered up and ready to give it a whirl in the real world. His alerts to begin with weren’t the biggest or most prominent, but with confidence he soon started alerting more boldly. Elizabeth was blown away how much more relaxed, calm and safe her episodes were. Henry would alert, she’d sit down, and everything would run its course smoothly; no injuries or drama. With time his alerting became really strong and he hardly missed any episodes and giving cheese parties after each alert became an enjoyable activity! Every other aspect of training took a lot of time, effort and patience. Some days it would take so much out of Elizabeth that she would burst into tears because things were just not going right. But they persevered and pushed through and conquered any obstacle that got in their way; and they’re closer and stronger for it.

Life has been so much more enjoyable for Elizabeth since Henry entered it. He has a very loving, cheeky and silly personality. He’ll rummage in his toy box to find the most obnoxious squeaky toy known to man. However, he does get very grumpy when it rains as water is 100% no go for him; he won’t even walk
in puddles!

Henry has exceeded all the expectations Elizabeth ever had of him and he has changed her life immensely! Elizabeth now feels so much safer, much more confident and a whole lot happier with him by her side. He has allowed her to confidently go back to judo and go back to university to continue her studies in animal science, so she can finally pursue her dream to be a veterinary physiotherapist. He’s taken away the fear from Elizabeth’s family and she cannot picture life without him, as he has brought so much light into so much darkness. As a 23 year old girl who had barely any independence, seeing her family and friends living their independent lives was incredibly hard. Henry has allowed Elizabeth to take her independence back and start living! He’s her wet nosed knight in shining armour and she couldn’t be more grateful to him.