How Emily transformed the family puppy into her own life-saver. 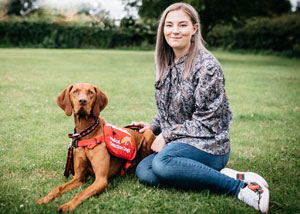 When Emily and her family chose an 8-week-old Hungarian Vizsla puppy as their first dog, they had no idea of what this dog was to be capable of and how he would dramatically improve all their lives.

Since becoming a teenager Emily, now 20, has suffered from a serious and complex neurological condition which causes her to collapse. As she was unaware that a collapse was imminent she would frequently be injured, ending up in hospital. The condition also meant that at any point she could lose certain vital functions like speech, taste, hearing, eyesight and even the ability to walk or use her arms.

Without warning she changed from an active and healthy girl into someone controlled by health problems. She had to leave school and give up plans for future studies and work. She became dependent on her family who were according to Emily, ‘ constantly walking on eggshells’. Everything had to be planned with meticulous care to try to keep Emily safe. It was because of the emotional toll this was taking on everyone that they decided to buy a puppy as a family pet. ‘It was the best decision, we as a family ever made,’ says Emily.

Barna, or to give him his full name Barna Kutya, which appropriately translates from the Hungarian to ‘brown dog’ is now 3 years old. But from as young as 6 months he began to act strangely immediately before Emily had a collapse. At first the family didn’t realise the significance of his behaviour and never having heard of MDD did not take any action. Fortunately, during a visit to Crufts, Emily learnt about the work of the charity and began to hope that training Barna to become an alert dog might be possible.

Although she had worked hard at basic obedience with him, she knew that training a Vizsla was not going to be easy. Vizslas are noted for their stamina and athleticism and are not often seen as assistance dogs.  However, MDD were willing to work with Emily and Barna, using the dog’s natural ability to sense that a collapse was imminent and the knowledge that the bond between the two was so strong that the dog was already trying to let Emily know this.

The pair are now an accredited partnership, a fact that makes Emily very proud. ‘It was my biggest high. I had just heard from my specialist that there was nothing more to be done for me. I was an angry mess, crying’. On her way back from the hospital in London, she received the phone call from MDD.  They were officially accredited. ‘I got down on my knees in the middle of the train compartment and hugged him with all my heart’.

Barna gives Emily a 5 minute warning prior to a collapse which allows her to get to safety and tell people around her. Emily says – ‘I have my independence back. We as a family can’t put into words how much this means to us and how much the charity and Barna have changed my life for the better. I can socialise and have opportunities that I could not have dreamed of, all because of Barna and his very special nose which keeps me safe’.

Emily and Barna have certainly overcome many challenges and misconceptions with strength of character and hard work to achieve their successful working partnership.