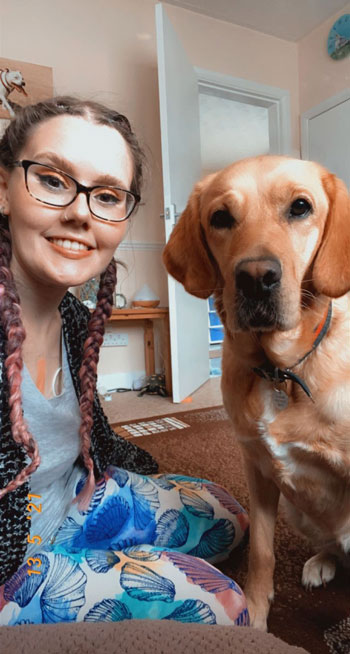 When Olive walked into the room Fay couldn’t believe it. This was a dog she had last seen when she joined a handling day at MDD centre. Paired up with Olive for practice sessions, Fay had immediately felt a connection with the dog however Olive was matched with another applicant, but the match did not progress.

Which meant that whether it was by chance or destiny the two were meant to be together. At one of their first meetings, Olive, although not scent trained for PoTS*, immediately alerted when Fay had an episode in the meeting room at MDD.

Fay, from Basingstoke suffers from numerous medical problems. Prior to her diagnosis with PoTs she was an active teenager, and passionate about cheerleading, becoming the leader for her squad.  Unfortunately the PoTs induced fainting episodes became so frequent she had to give up cheerleading, and then many of her other hobbies like sewing and baking, eventually she needed help to tie her own shoelaces to avoid an episode.

No situation was safe. Episodes could even take place while she was sat in a chair, so she could neither go out alone or be at home on her own. The falls following a faint were often leading to emergency hospital visits and life was dismal. “It felt like I was losing everything. I felt miserable, hopeless and alone’ says Fay.

After reading about MDD, Fay applied for help in 2018. As time progressed Fay’s health declined, and she required hospital admissions due to Gastroparesis or paralysed stomach which necessitated a feeding tube. Then Covid struck and all new partnerships were put on hold. Fay says the ‘feeling of hopelessness was ever lingering. I remember being terrified I wouldn’t be well enough when I got my dog’.

Fay continued to struggle with severe intestinal problems and had to spend 6 weeks alone in Southampton hospital. However she never gave up hope completely.

Out of the blue in March 2021, things began to change. Fay was contacted by MDD, meetings were arranged, scent training began and in June, Olive, a lab/retriever cross came home to stay with Fay. “Olive is a fun, loving character who has a complete love for life’, says Fay. ‘She has this calming energy about her and just makes you feel relaxed in her presence.

It feels as if Olive has always been with us, like she was the missing piece to a puzzle and now it’s complete.’

Olive has a very high success alert rate which gives Fay up to 5 minutes to get to a safe place on the floor before losing consciousness. When she comes around Olive even gets water for Fay and can pick up dropped items.

Life is now opening up again for Fay, no longer needing constant supervision by her family at home, she can go out with Olive into shops in their local town and visits to A&E are thankfully a thing of the past.

‘I can see a future for myself. I’ve made new friends and been able to experience new things. I can’t wait for further adventures with Olive and to see where life takes us’ she adds.

Fay who has travelled a long, hard journey to get where she is today sums up what Olive means to her as, ‘confidence, happiness and safety’.

She concludes, ‘I have the perfect dog by my side and my life has never been better. I wouldn’t change a single thing’.

*PoTs – Is a condition caused by an abnormal functioning of the autonomic (involuntary) nervous system where an extreme increase in heart rate can occur when sitting or standing up, this often can cause the individual to black out with no warning.