Richmond – from cheeky pup to best friend and life saver 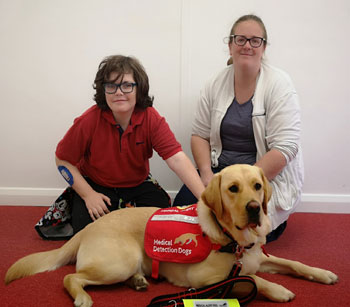 15-year-old Jamie got more than a puppy when Medical Detection dog Richmond came to stay. He got his mum back. Jamie who was diagnosed with a rare blood glucose disorder just before turning two, also suffers from multiple other disorders and viewed his mother, Naomi as a nurse not his mother. Most of his childhood birthdays and Christmases were spent in hospital and at home his bedroom was essentially a hospital room.

‘Life before Richmond was just existing from one blood sugar test to the next’, says Naomi, ‘by the time I’d done all the medical bits I had no energy left’.  Naomi had to become a 24/7 carer for her son following NHS funding cuts two years ago.

‘Richmond, or Richie as he is known at home, saved my life’, says Naomi.

Although the family had known of the work of Medical Detection Dogs for 10 years, they only got in touch with the charity in 2017 after encouragement from Jamie’s then Head Teacher. Sadly, things were not easy for Jamie during the application process. He struggled to learn new commands to use with an alert dog. After a year Naomi was ready to admit defeat.’ It looked like the one thing that could help Jamie and myself wasn’t meant to be’.

The Medical Detection Dog trainers however had another idea to try and suggested Jamie and Naomi consider socialising an Medical Detection Dog puppy. The idea being that this would allow Jamie to spend time with a puppy and see if they could learn together. That way he could get used to a dog, be more relaxed and neither he nor the dog would become stressed.

Although there could be no guarantee of success the first introduction went well. Jamie found the bouncy Richmond funny and accompanied by a trainer brought him home. The trainer, who Naomi describes as ‘fantastic’ helped the puppy settle in his new home and left the family with Jamie laughing as Richmond settled beside him.

Naomi knows that Jamie has loved training with Richmond, and this has been taken at a pace that has not pressurised him.

‘Jamie has grown in confidence with his best friend beside him. He laughs more, he’s relaxed and when he’s upset his best friend is there to lick him’, adds Naomi. ‘Richmond is our hero. I now test Jamie at my bedtime and then in the morning. Richmond alerts to the rest.

Jamie sums it up by saying I’m his mum again.

I’m hopeful with Richmond by his side we can lessen the risks of more damage being caused by unstable blood sugar levels. I accepted a long time ago that Jamie wouldn’t reach adulthood, but who knows’, says Naomi.

Jamie has come a long way from never being able to sleep alone, always having nurses, his mum or family in his room testing him, to being in his own bedroom with Richie alongside to alert.

‘I will be forever grateful to the charity’s staff’, says Naomi. ‘they thought outside the box and have saved not only my life but also Jamie’s’.