‘I am extremely lucky to have such a wonderful dog.
We are a real team’ 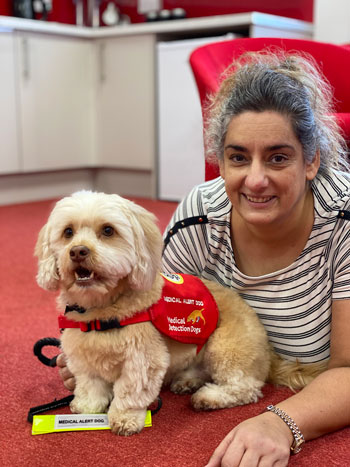 We all think our own dog is special and everyone knows that all Medical Detection alert dogs are wonderful for the work they do in keeping their partners safe and enriching lives. And then you come across a Medical Detection dog who is truly unique.

Juanita, who is known locally as ‘Mrs Doolittle’ has a natural affinity with animals, ‘I just seem to attract all the strays and ill animals. Toffee’s mother Kiki came to our village after having had her puppies when they were around 10 weeks old. Mum and puppies were rescued through a friend and I rescued Kiki and Toffee.’ This brought her previously one dog household immediately up to 3.

Although Juanita now enjoys an energetic outdoor life, whenever she can fit it around her university studies and her health allows, only a few years ago life was very different. She suffers from a variety of chronic conditions including asthma and anaphylactic allergies which cannot be medically controlled, leaving her at risk of collapse and emergency hospital admission. She became housebound and had to stop work. ‘I was frightened to go out. I didn’t know if I would come into contact with one of the many  anaphylaxis  allergies I have.’

It was only after a while that Juanita began to notice that Toffee was trying to alert her to oncoming episodes. ‘He has always been very attached to me and we have a wonderfully close bond but when someone mentioned that he was just like a Medical Alert dog I began to realise that they could be right. I was hesitant but decided to approach the charity for an assessment’. And she is so thankful that she did.

‘He has totally transformed my life,’ says Juanita who lives alone. ‘He will not be diverted if he wants to alert me and if I’m not capable of responding he will bark and try to alert others until someone is made aware.

He can even bring me my phone, or medication. He is my hero’.

But Toffee’s talents don’t stop there. Because of her asthmatic condition Juanita is sometimes unable to speak to Toffee, and so has taught him various commands in sign language. He even verbalises back to Juanita when she asks him questions in sign language. For instance she can ask him if he wants out, fed, a drink, the toilet and he will make a sound back as if to say yes at the right question.

Multi lingual he also understands commands in Spanish and French as well as English!

It could be all his visits to Winchester University with Juanita, who is in her final year of study for a degree in Forensic Science, have increased his brain power, as both he and Juanita are going to graduate together next summer.

But this dog is not all work and no play. An enthusiastic paddle boarder he loves the water and rides along on the front of Juanita’s board and despite his diminutive size has also scaled Snowdon.

This unique dog has meant that Juanita has regained a life she thought she had lost. Her hospital visits and medications are reduced and although she still has episodes where she cannot get out of bed and has to manage her conditions, she says ‘I am extremely lucky to have such a wonderful dog. We are a real team’.