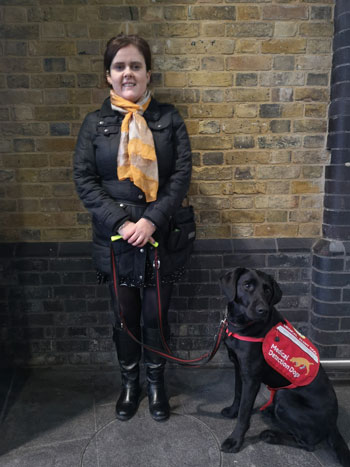 The missing piece of her jigsaw is how Louise describes her Medical Alert Assistant Dog, 2-year-old Labrador Mercedes. Louise is liable to faint without warning at anytime because she suffers from Postural Tachycardia Syndrome, known as PoTS for short.

Formerly a nursing sister on a respiratory ward, Louise had to retire because of her health issues. Unable to go out alone for fear of fainting and ending up in an A&E ward she found her life becoming increasingly restricted. ‘I could not go out without worrying about passing out’, Louise explains.

Although not convinced that she was unwell enough to be considered for a Medical Detection Dog, she felt she had nothing to lose from applying for help. ‘I was really surprised to be invited to an awareness day. Following an interview I was told I could come to a handling day’, says Louise. ‘It felt surreal’.

However, the journey Louise began with MDD was not to be straightforward. The first dog match was unsuccessful and the second dog she was matched with unfortunately developed allergies and had to withdraw from the programme. However it was to be third time lucky with Mercedes, who Louise describes as both her companion and partner in crime. ‘She is someone I can look after and she does the same in return. She is like my shadow and we do everything together’.

Fate intervened again when Louise developed breast cancer. She describes the support she received from the charity through this difficult period as ‘fantastic’. Mercedes gave her something to focus on whilst having surgery and treatment. ‘It feels like I not only have a superhero dog but a family in Medical Detection Dogs’, she says.

When Mercedes alerts Louise she has time to sit or lie down, wherever she is, without risk of injury and because Mercedes is clearly identifiable as an Assistance Dog, she acts as a visual aid to strangers.

‘With her by my side I have been able to go out longer alone and to different places. She has given me my confidence back. I am no longer bothered about embarrassing myself and my family are less worried about me’.

Louise is now able to go to the gym unsupervised, use public transport and be a lot more sociable. She describes Mercedes as a dog version of herself. ‘We tend to mirror each other and are usually tired or have energy at the same time. Even on down days, I have to walk her which perks me up. Just being around her makes me smile’.

And to anyone thinking about approaching the charity for help she would definitely encourage them. It is hard work, there are emotional ups and downs but it is all well worth it, according to Louise, who describes the bond with a Medical Alert Assistance Dog as both life changing and enhancing.

‘I am a happier and much better person because of Mercedes and I can’t begin to thank MDD enough’.