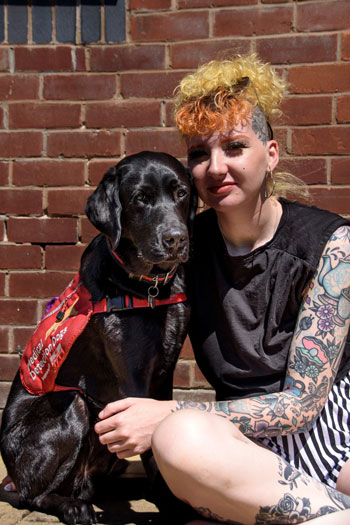 Aged only 13, Paige found her life in turmoil following a bout of chicken pox. For the next 5 years she felt her adolescence slipping away from her. The fun was replaced by medical visits, trials, medications and a struggle against depression as she and her family tried to find some control over the varied symptoms which were causing Paige to collapse, injure herself and end up in A&E.

‘I felt like I was grieving for my “well” self’, says Paige. Eventually a diagnosis of PoTS was made. This diagnosis of Postural orthostatic Tachycardia Syndrome was a turning point in her life. Sufferers have an abnormal response in their automatic nervous system which controls things like blood pressure, heart rate etc. and this means fainting, nausea, and a racing heartbeat are common.

With life seeming a constant struggle, Paige who had heard of MDD through social media, approached the charity for help in 2016. MDD ‘felt like hope’, says Paige. Unfortunately, a decline in her health and 2 dog matches which did not progress, meant Paige did not partner with Bear, a young black Labrador, until August 2020. Ever positive however Paige says,’ I wouldn’t change the history of my journey, even if I could. It helped me find Bear – I can honestly say we are the perfect match.’

Paige, a Social Care Administrator from Barnsley, credits Bear with giving her much more than her life back. ‘I have never felt so safe and capable. I am much stronger now, due to building up Bear’s dog walks and I have the confidence to explore with him, knowing if I become acutely unwell he will let me know. He really is my life saver.’

Now able to horse ride Paige has taught Bear to be obedient around a horse which means they go on free runs together. Paige and her partner own 3 cats and 3 horses and he has fitted right into the mix. Bear, whose happiness Paige describes as ‘infectious’ is a hard-working dog with a super nose and a cat, called Marmite, for a best friend.

Since partnering with Bear, Paige hasn’t suffered any serious injuries or been to A&E as his alerts give her time to assess the situation and get to the floor. Her pride in her dog is obvious. ‘He benefits me in so many ways. The comfort of knowing I am safe is unmatched. I am unbelievably grateful to everyone who played a part in the “making” of Bear.’

And her advice to anyone else who might be struggling with a condition and considering asking for help from MDD? ‘Go for it, you deserve it’.