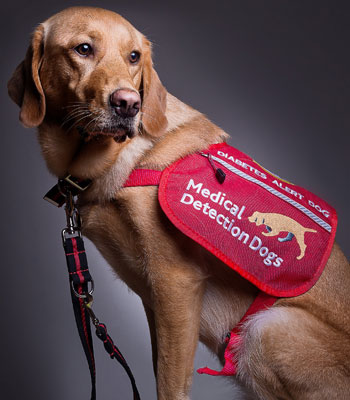 After 25 years battling to retain her health, trying all the medical technology available, only a small, two-year-old dog called Holly has managed to give Wendy back her love of life.

Wendy, now 38, was diagnosed with unstable Type 1 Diabetes at only 13, following a severe bout of flu. This means that without warning her blood sugar levels rise and fall dramatically and quickly. Because she has no knowledge of this, she is constantly at risk. Her quality of life is further compromised by a variety of other serious and complicated conditions, which make managing her diabetes almost impossible. Until that is, Holly appeared.

Wendy and her husband Paul had been at rock bottom. Their relationship was being strained. Wendy could not be left alone for fear of a blood sugar crash and Paul was exhausted working during the day and waking hourly throughout the night to check Wendy’s blood sugar levels.

A chance conversation made them aware of the Medical Detection Dogs charity and medical alert dogs. This seemed to be the lifeline they were searching for and they were amazed to receive an invitation to visit the centre soon after applying. Even better news was to follow when after a home visit they were matched with a dog in advanced training who was placed with them.

‘He threw himself at us and we were all in love,’ said Paul. ‘He had the energy and playfulness that we wanted so much’.

Although the dog successfully alerted from the very start, he proved difficult for Wendy to handle. When she became ill again, she lost faith in her ability to control him. Within 6 months, the decision was taken to return the dog to Medical Detection Dogs and he has since gone on to be successfully placed and accredited with another client.

‘Giving the first dog back was the hardest thing we ever had to do. Although Medical Detection Dogs were extremely supportive, we knew that it could take years to find a dog to match Wendy’s deteriorating health and low energy levels.’ Paul explained.

However, by August 2017, Holly a Fox Red Lab x Retriever was home to stay. Paul describes their first meeting when they realised she was perfect for Wendy. ‘She was gentle, easy to handle and a joy to be around’. She even alerted during their first meeting.

Wendy’s ill health further deteriorated soon after the placement and she had to be hospitalised, spending some time in critical care. Because Wendy could spend little time with Holly their partnership suffered. Eventually Wendy had to stop work as a Home Office Civil Servant on medical grounds and began to suffer from depression. The team at Medical Detection Dogs stepped in to provide extra training both at home for Wendy and at the Centre. This helped to overcome those difficulties, and Holly began to alert reliably again. One year on, Wendy and Paul’s remarkable achievements in working through their problems and setbacks was recognised by the Client Support Team at the Centre. An emotion filled day saw Holly being given her own Medical Detection Dogs coat, as an Accredited Diabetes Assistance Dog.

Holly has helped Wendy to enjoy life instead of simply coping with ill health. Instead of contracting, Wendy’s life is now expanding as she can proudly take Holly out in public on her own, trusting in her dog’s special ability to keep her safe.

Paul has returned to full time work and can enjoy a full night’s sleep knowing that Holly will alert them to any risks. As he puts it, ‘I know Wendy is safe in Holly’s capable paws’.

Quite an achievement for a young, quiet dog with a gentle nature who loves nothing more than to settle down by Wendy’s side. And just to be sure, Holly always gets close enough to Wendy to make sure they are touching.