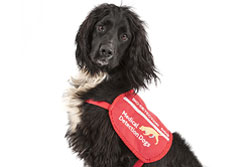 One year old Zen, a Spaniel, came to Medical Detection Dogs last September from Battersea Cats and Dogs Home. As Medical Detection Dogs has a strict no- kennel policy Zen initiallylived with CEO Dr. Claire Guest, who worked with Zen on his basic training skills and also on reining in his energy. Later, Zen moved to the home of a volunteer foster couple, who live ona small holding with ten acres.

When Zen first came to MDD he had OCD (he would pace the same route over and over again), but he is now a changed boy, and a very happy one at that. His confidence has grown,he has endless energy, and he is very affectionate. He loves running around the 10 acres of land at his foster home and has earned the nickname ‘Stig of the dump’ because of all themess he brings back in with him.

Zen’s fosterer drops him off around 9am and a typical day for him, aside from two or three 20-minute training sessions in the Bio Detection training room, involves a group walk withother dogs and staff, playtime, and then some much-needed chill- out time on his favourite blanket in the office. The training work he does is akin to a game that he loves playing, and heis given lots of rewards. His fosterer collects him late afternoon to take him home where he leads a normal happy life as a member of the family and loves playing with their other dog.

The training Zen has undergone so far has covered basic obedience, initial scent work training and assessment. Zen was assessed using different techniques to test his drive to hunt andfind things such as food or a toy. His favourite is tennis balls. The tasks increased in difficulty and Zen’s willingness to use his nose and continue to search for his food or toy made himan ideal candidate.

Zen has now been assigned to the Parkinson’s disease project where he is learning to identify the odour associated with the disease from skin swab samples. It is hoped that this willrevolutionise the way in which Parkinson’s is diagnosed in the future and will mean sufferers can commence treatment earlier. Zen has certainly come a long way from being a rescuedog.

Neurological diseases affect 10 million people in the UK.  Find out how Zen is helping to improve early diagnosis of this progressive debilitating disease.