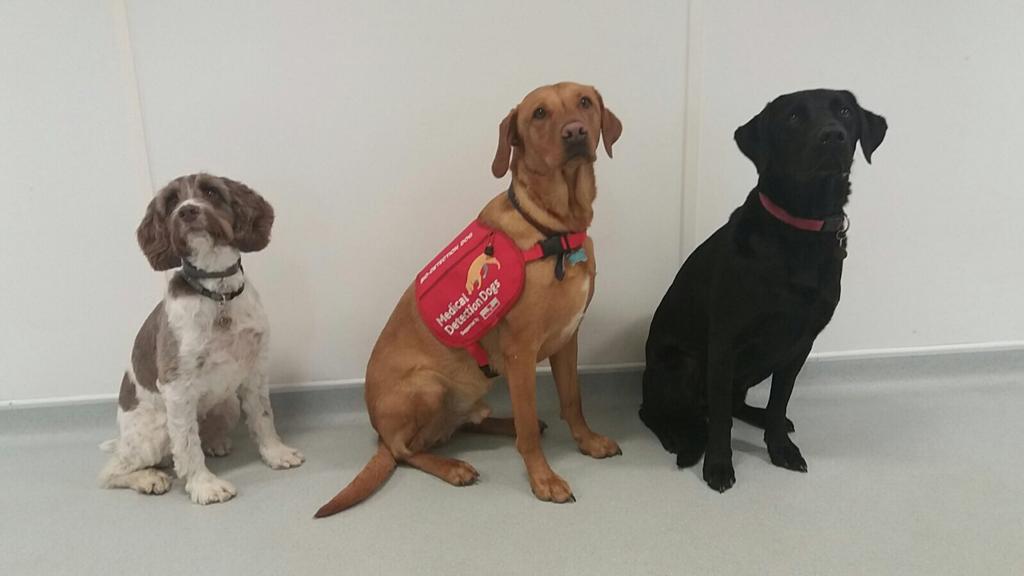 Scientists report that dogs are able to detect ultra-low concentrations of Pseudomonas, the commonest cause of lung infection in the life-limiting inherited disease, cystic fibrosis.

A new scientific study by Imperial College London and the Cystic Fibrosis Trust has found that Bio Detection dogs trained by the charity Medical Detection Dogs have a very high level of accuracy when asked to identify of bacteria associated with serious lung infections.

A major cause of lung damage in Cystic Fibrosis (CF) is infection with bacterial pathogens, the most prevalent of which is Pseudomonas aeruginosa(Pa), chronically infecting around 60 per cent of the 10,000 patients in UK by adolescence and adulthood.

The major findings, published in the European Respiratory Journal, have shown that medical detection dogs can differentiate between Pa and other CF bacterial pathogens by sniffing bacteria grown in a nutrient liquid.

Pa may be successfully eradicated, but frequently reoccurs and develops resistance to antibiotics. Chronic Pa is closely linked with faster lung function decline and earlier mortality.

The heavy antibiotic burden imposed upon patients and the resulting bacterial resistance, allergies and toxicities compound the detrimental impact of the infection itself.

This is a particular problem for children with CF, as it is often harder to diagnose in them, but takes hold of the lungs and becomes extremely difficult to shift. If they have symptoms, they are usually prescribed a broad spectrum antibiotic that will not work if the culprit is Pseudomonas. Early detection will lead to them receiving a targeted antibiotic, stopping the bacteria taking hold.

Given the natural odour of Pa, the new study’s authors hypothesised that dogs can be trained to detect this bacterial organism. As a first step they assessed the ability of four dogs to identify Pa from other CF bacteria. The bacteria were grown in the lab, and then filtered out of the solution which was presented to the dogs.

In the trial, the dogs were trained and tested on customised sample presentation stands. During training, correct identification of Pa samples was rewarded by an auditory click and food.

Once trained, dogs were presented with Pa-positive cultured samples, other cultured bacterial controls or sterile liquid in a random, computer-generated sequence. A positive indication (when the dog either stopped or sat down) was rewarded if correct.

The samples were then presented in a double-blind testing scenario. Four blind studies were undertaken:

Sniffer dogs are familiar in contexts such as airport security, and reports of their use in medical fields such as diabetes research are established. There is also an emerging recognition of their ability to detect other life-threatening diseases including some cancers.

The study was supported by the Cystic Fibrosis Trust and conducted by Imperial College London and Royal Brompton Hospital, in collaboration with Medical Detection Dogs, who are delighted that this rigorous scientific study has demonstrated the ability of the dogs they train to accurately detect possible indicators of infection and disease.

“This is a really exciting development. Advanced technology to detect infections, for example in breath, has proved difficult so far. The successful training of the dogs on cultured samples will now be used as the foundation for testing patient samples directly.

“People with CF could ultimately monitor their lung infections from home by sending in samples for the dogs to check. We are very grateful to those with CF, cared for by Royal Brompton Hospital, for providing samples for this project and to the CF Trust for their funding support of the next stage of this project as part of the Strategic Research Centre for Pseudomonas infection.”

“The findings of this world-first study into the ability of dogs to detect Pseudomonas are yet another indicator of their remarkable contribution to saving human lives.

“Pseudomonas is a condition that affects thousands of people each year in the UK alone. I can assure them that Medical Detection Dogs is working very hard to find effective, affordable and sustainable ways to manage their condition.

“These trial results are just one more reason why dogs never cease to amaze me. They have a highly sensitive sense of smell, unfailing loyalty to their owners, and the ability to restore hope to many.”

“A quick and easy way of detecting Pseudomonas would make a massive difference to people with cystic fibrosis and their families. Once it takes hold, it requires strong antibiotics that can require hospital stays and often carry significant side effects. Some antibiotic-resistant strains can even cause permanent, life-shortening lung damage.

“We’re delighted to fund the next steps of this work as part of our ‘Personalised approach to Pseudomonas’ strategic research centre, so we can build on this work and help people with cystic fibrosis live longer, healthier lives. “